6 Problems with the Vehicle Since We Left Europe 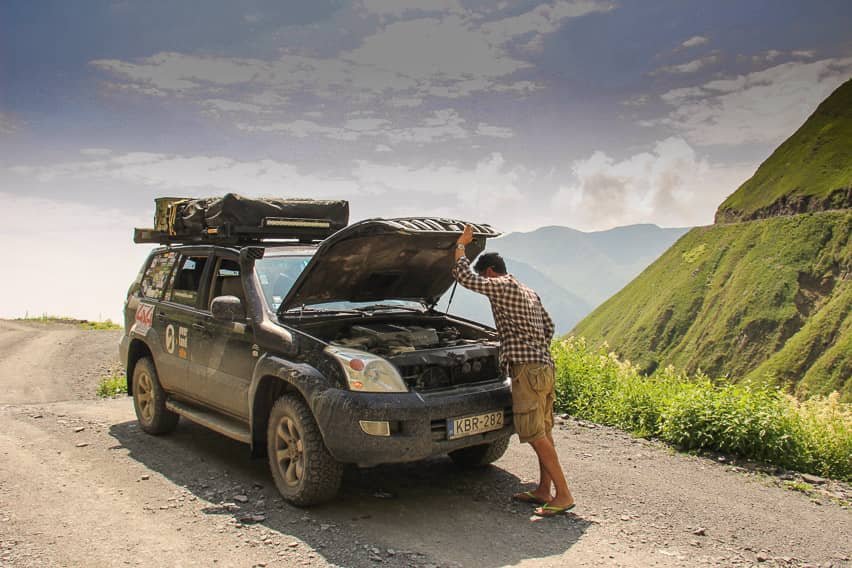 We had a number of issues with the vehicle since we left Budapest, some more serious than others.

We are now in Mongolia and just about to enter China, and the problems seem to keep piling up. But let’s go through each of them in detail:

Signs: coolant level dropped down by 2-3 dl every day.

Solution: the water pump was replaced at an official Toyota service in Tbilisi, Georgia.

Signs: on long stretches of roads going uphill, the temperature gauge shot up.

Cause: the radiator was full of dust and sand due to our trip to Africa earlier this year, so the radiator couldn’t do its job properly. I thought the problem was connected to the faulty water pump but that wasn’t the case.

Solution: a complete radiator wash at an official Toyota service in Karaganda, Kazakhstan.

Cause: this wasn’t really an issue with the vehicle itself but since the Front Runner Slimline II roof rack is such an organic part of the rig, I thought I should include it. The roof rack cracked due to an incorrectly tied down alu-box which, due to its weight, tore apart one of the legs of the rack on bad roads.

Solution: the rack was welded in a workshop in Ulaanbaatar, Mongolia.

Signs: clicking noise from the starting motor while not turning the engine over.

Cause: I think this issue was caused by a combination of things. The engine had done 320,000 kms (199,000 miles) by this time, while there were a few incidents where we got bogged down very badly in mud. In addition, there were several deep water crossings. The starter motor was obviously dirty inside and couldn’t engage with the flywheel.

When The Starter Motor Got Fixed

Solution: driving 420 kms (261 miles) in 19 hours through the worst of roads in order to eventually find a mechanic who was willing to take the starter motor apart, clean it and grease it in Bayankhongor, Mongolia.

Signs: the automatic transmission doesn’t shift to overdrive, sometimes not even in to fourth gear.

Cause: I have no idea. Was something incorrectly done at the Toyota service in Karaganda when the transmission oil was changed? I don’t know and it’s a bit of a worrying situation.

Solution: I don’t know yet, and at this point  I can only hope the transmission will keep working until we get to a major car mechanic, preferably an official Toyota service in China.

Update: the transmission wasn’t receiving the correct signals due to a corroded connector in one of the cables. This was probably due to the several river crossings in Mongolia. The cable was replaced in Altai, Xinjiang, China and the automatic transmission worked seamlessly ever since.

Signs: no power. The engine is struggling to accelerate and climb roads going uphill.

Cause: same as with the problem with the transmission, I have no idea. Again, it’s a very worrying situation in a place where the next mechanic is a thousand kilometres away.

Solution: No idea yet for this one either.

Update: replacing the cable for the transmission (see above) resolved the problem with the turbo too. I’m not sure how the two issues were connected, but I was glad both were resolved by a simple, but expensive, cable replacement.

There seems to be a lot of issues within two and a half months of being on the road. I think the water pump would’ve needed a replacement even if we’d never left Europe, while the other issues are possibly connected to the thousands of kilometres of off-road driving since the beginning of January.

I often feel that we don’t need to look after the vehicle by driving very slowly on horrendous roads just because it’s a Land Cruiser. It can take anything. But it’s still a machine that has tens of thousands of complicated parts, so we probably do need to slow down.

I really hope the turbo and transmission will be easy fixes but in reality, I’m worried that these are now serious issues.

Driving from Budapest to Singapore – The Last Episode

Difficulties with Entering Thailand and how to Tackle Them

Where To Go in Laos as an Overlander