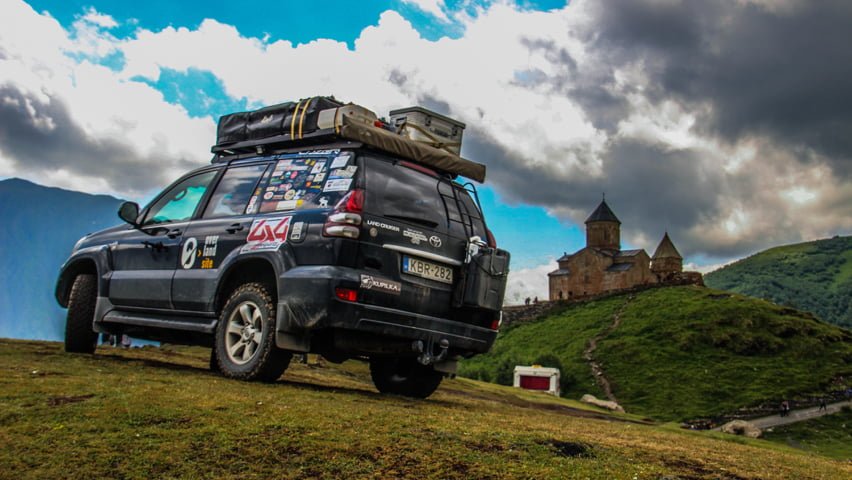 Leaving very early from Cappadocia meant there was hardly any traffic on the road. We were driving east with Vince and Maxime following behind us.

After a couple of hours I started to recognize a few places by the road. This was the same main road we took when we drove to Mongolia with two very good friends of mine, Ash and Jon – . or at least attempted to, but our pick up truck broke down in Tajikistan, so we had to find other means to get to Ulanbator. But that’s a story for another day:

The goal for today was to get relatively close to the Georgian border. We haven’t planned any major stops for the eastern part of Turkey, so we wanted to make good progress.

It was a long drive but the last part was going to provide a great reward, as the road going north from Erzurum toward the Georgian border is an attraction all on its own. Erzurum lies on a high plateau, so driving into the mountains actually means driving downhill. It was just spectacular.

Before we got there though, the aforementioned plateau came with some unexpected issues. The engine of the Toyota started to overheat on long stretches of uphills. That had never happened before and even the hot weather and the weight of our vehicle didn’t justify that. I was quite surprised and a bit scared too.

We stopped immediately and I checked the coolant, which was actually just below the minimum required level. At the next petrol station I bought some more coolant and stopped at the next clear area next to the road to wait for about an hour and top it up to the maximum sign on the tank. To be honest, I hadn’t checked the level for ages and thought it had been low for a while, but a long uphill on a really hot day had finally caused the engine to overheat. While we were waiting for the engine to cool down, I had a chance to take some shots with my drone around the area.

Maxime and Vince carried on since we’d already agreed on a camp spot and were going to meet up there later.

After the coolant top-up we set off for the last stretch of road to the campsite… only to see the temperature gauge rise again a bit later. I was a bit disappointed that the coolant top-up hadn’t solved the problem and was wondering what it was, especially since the very last part of the drive involved taking a bendy, steep uphill road where the engine temperature was fine. It was really strange.

It was 8pm by the time we met our new Belgian friends at this beautiful campsite on the Coruth River. It seemed more like a lake, because about 200 years ago a massive landslide blocked the path of the original river and created a large water reservoir. Where we stayed wasn’t actually a campsite but more like a restaurant on a nice peninsula that allows campers to spend the night right next to the building.

We had some beers, talked about our plans and later, Vince and I checked the coolant level of the Toyota again. To my surprise, the level was down below minimum again. It was obvious the truck was loosing coolant and it also that I needed to get it checked out; we still have an enormous amount of distance in front of us with difficult mountain passes, deserts, other hot climates and so on. The issue came too soon during such a long trip, and brought back memories from the mentioned Mongolia Charity Rally during which our Mitsubishi L200 was constantly overheating.

This new issue changed our plans a bit, as getting the car fixed became the priority.

We decided to first ignore what we originally planned to see in Georgia, and instead head straight to the main Toyota dealership and service in Tbilisi – hence our Polarsteps route looks a bit messy in Georgia.

Maxime and Vince were heading northeast from here, whereas the quickest route to Tbilisi led us toward Batumi and the border crossing at the Black Sea. We said goodbye and headed for the border where the crossing took us 6 long hours to complete. There was an unbelievably long queue of cars waiting to get out of Turkey and into Georgia. It was about 11pm by the time we crossed, and we both were really excited about the country.

There’s so much to see and there are regions where wild camping is just fantastic.

I got fined for not stopping at the Stop sign

First though, we had to get the car fixed. This was constantly on my mind so after a great sleep in a weird hotel in Batumi, we headed for Tbilisi. It took us all day to get there and we deliberately chose a hotel close to the Toyota Centre.

I was there by the time the service opened and was prepared with a short text in Georgian (Google Translate is brilliant!) explaining the issue. It turned out I didn’t need the translated text, as most people there spoke very good English.

It took Vladimir, the mechanic, about 5 minutes to identify the potential issue; a leaking water pump. The part was replaced within 2 hours and I was happily on my way!

The leak on the water pump was so obvious that I thought this must have been the cause of the coolant loss as well as the overheating engine. I found out quite soon the next day that while I might not need to top up the coolant anymore, the overheating engine remained an issue. I researched it a bit on the web, as well as spoke to a few people in a couple of Facebook groups, only to realize that an issue like this isn’t easy to resolve. The cause can range from an issue with the thermostat or he weight of the load the truck is carrying (though I don’t think this is the issue) to all the dust and sand the radiator collected in Africa earlier this year (I think there’s a high chance this is the problem). To be fair, I should have had the radiator and cooling system cleaned completely before this trip, but thought if everything was working then why disturb any of the systems?

I just hope the problem isn’t going to get unmanageable, as currently, with constant monitoring of the temperature gauge and turning the heating on (very nice in 100 degrees F / 38 degrees C) we can keep the engine temperature under control.

We made it to Stepantsminda without too much of an issue. We had to stop once but otherwise, with the heating on, we arrived at Mount Kazbegi in no time.

The area is famous among hikers, and for good reason. It’s hard to describe the scenery, so I’m just including dozens of pictures to show.

The Gergeti Trinity Church on one of the peaks was built in the 14th century and I can’t even imagine how were they able to do so in that spot.

The plan was to camp up there, but we were greeted by such heavy rain that camping was out of the question. We opted for a basic guest house instead.

We went back up to the church again the next morning to see it properly and have lunch with a view from the top of the mountain.

Our next attraction to see was Vardzia, quite far from here, so after the scenic, tin-food lunch we headed back south again. The previous day’s heavy rain cancelled our hiking plans, but to be honest, we should have made a bigger effort to find the time for a couple of hours hiking later. But as I mentioned, heading straight to Tbilisi to the Toyota service messed up our plans, so we lost quite a bit of time due to this.