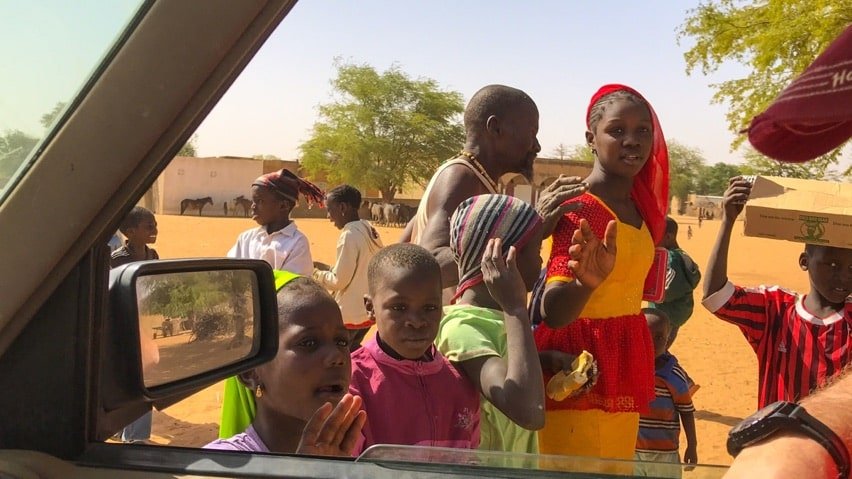 We were woken up early by the muezzin, so we weren’t the last ones to get ready in the morning for a change and we even had time for breakfast.

We filled up in St Luis and headed for the savanna. From an off-roading perspective, it was going to be an easier day, but the countless dirt road turn-off options on the vast savanna made navigation quite tricky. In the usual manner for our group, we really enjoyed the first half of the day but struggled in the second half.

The dusty tracks were a lot of fun with fast bends, mild bumps, and very Africa-like scenery. The baobab trees and remote villages made up of just a few huts reminded me of documentaries you see about Africa. Women were wearing colorful dresses and carrying literally everything on their heads. I don’t know how they managed to balance some of the stuff we saw them carrying.

Quite often the tracks lead through villages where 4-5 fully equipped overland rigs aren’t an everyday sight, so when we occasionally stopped on what could have been called the center of the villages, we obviously drew a lot of attention. However, the further we were away from the Atlantic coast, the ​friendlier people became, and begging or asking for ‘cadeau’ stopped completely. It was a nice change. Evelin and I were much happier to hand out school stationery and toys here than in places where people looked demanding rather than simply in need​.

In these villages, kids wouldn’t even approach us first and looked very surprised to see us, but then after the first few workbooks and pencils that we handed out, 10-20 kids surrounded us asking for more. They all smiled and were very friendly in every village we visited.

We only realized sometime late afternoon that we still had a long way to go until the dedicated bivouac. A familiar situation. As I mentioned earlier, this was going to be an easy day but we managed to make it very difficult toward the end. As it got darker, tracks became very hard to navigate and the dust made it nearly impossible to follow each other in our little convoy. We made very slow progress. Often tracks suddenly just disappeared with no way to carry on because of an impassable hedge or ditch. We had at least 50 miles to go when we decided to drive really close to each other, following only 2 feet behind the car in front and driving 25 miles an hour. I wish we had never agreed on that. The Porsche was leading the convoy as they had the satellite maps, the Disco was second and we were third.

With all the dust on the savanna tracks, we chose a very bad day to drive without the AC on and roll the windows down. During the day it had been manageable. However, now driving with so little distance between the cars it was like half a dozen men were constantly shoveling dust at us. By then we had rolled up the windows but even that didn’t help. I was really worried about how the engine would handle all this, but it turned out that while the engine worked fine, it was me who made a cock-up. So close to the tracks on both sides, there were occasionally small, tree-trunk sized termite hills and in the dark, dusty night I hit one of them hard with the front right wheel. I stopped immediately, expecting a puncture at the very least and fearing something worse, but luckily the wheel seemed fine. Only after setting off again did I realize that the steering wasn’t straight anymore. It wasn’t too bad, but I knew something had been damaged.

It took another hour to find the bivouac, during which I got so tired that I asked Evelin to watch me instead of the road in case I started falling asleep at the wheel.

It was 3.30am by the time we opened our rooftop tent. To say dust covered every single part of our trucks is an understatement.