Our Roof-Rack Has Cracked 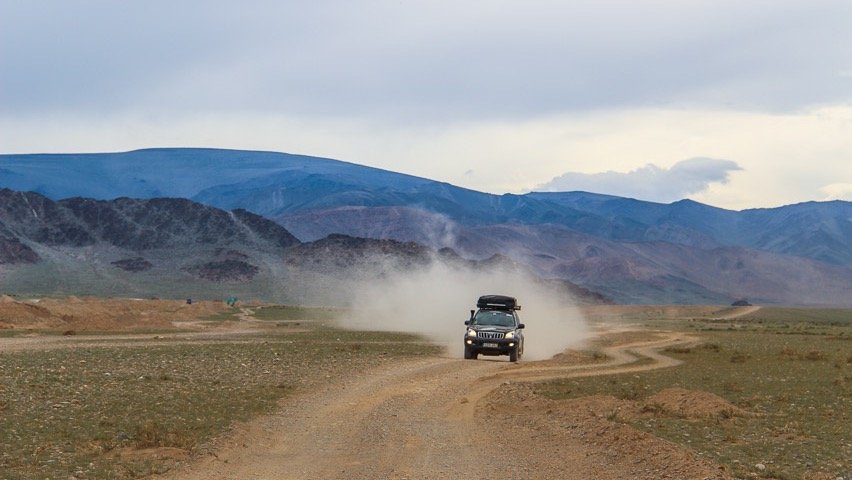 The next few days were somehow always about rushing for different reasons.

After spending the night in the weirdest hotel I’ve ever been in, we had a chance to meet Lotte and Niels for the first time on the way to Semonaika. We’d been talking for about 6 months about our tour in China and we were really happy to finally meet them. Unfortunately, the reason our paths crossed so early was that they’d had some difficulties obtaining the Chinese visa in Kazakhstan, so they were rushing to Ulaanbaatar to make sure they get there in time for their visa application to be processed.

However, they had some issues with their vehicle losing coolant (just as we did in Georgia), and had to turn back from the Kazakhstan-Russian border to get the problem sorted in Oskemen. So we were heading north while they were heading back down south, which was when we met.

Crossing into Russia from Kazakhstan took a bit longer than I expected. According to check-ins by other overlanders crossing here before, the process should usually take 1 hour at Semonaika, but we must have been unlucky because it took us three times as long. It was late afternoon by then so we settled with the first free camp area marked in iOverlander. It was at a beautiful lake and as there were quite a few local campers as well, it felt very safe.

The Horizons Unlimited Mongolia meeting (more on that later) was about a week away and I really wanted to be there, so this was one of the reasons why we didn’t really spend time in the Altai region of Russia. I felt we lost out a bit, because this area is just stunning. For the first part we tried to take small country roads (those are always the most beautiful), but even the main highway is spectacular. It will definitely be one of the main destinations on our next overland trip to Central Asia. Even though we theoretically had enough time to camp here a few days, I was more keen to discover West Mongolia before the HU meeting.

Four years ago with two great friends of mine, Ash and Jon, we attempted to drive from London to Mongolia when we took part in the Mongolia Charity Rally. Because our car broke down in Tajikistan though, we missed out on the western part of Mongolia (we flew in to Ulaanbaatar eventually and hired a Land Cruiser to camp 5 days around the Orkhon Valley). So when we entered the country, I was quite relieved to find that it’s actually possible to reach Mongolia from Europe if you choose the right vehicle.

When you enter the country from the west close to Tsaaganur, you immediately get a sense of what it will be like. Wide open spaces, a dirt road instead of a paved one, amazing landscape everywhere. We decided to take the Southern Route towards Ulaanbaatar so we stayed in Ölgii at Altai Point, which has been praised by travelers online. Hot showers and electricity 24/7 isn’t something you can take for granted in Mongolian campsites and guest houses, but at Altai Point you have it all, along with an in-house restaurant and very kind staff. I can highly recommend this place.

The next morning we did some grocery shopping and tried to buy a sim card but since it was Sunday, we didn’t manage to get one. Ölgii is an interesting place, with not many trees or anything green and surrounded by tall mountains, as Mongolia’s westernmost part is part of the geographical Altai region. Unfortunately, since it’s a border area with China and Russia, you need special permission to go there and possibly a guide to show you where to go, so reluctantly, we decided not to try it. Next time! I keep saying that, but I’m pretty sure this won’t be our last trip from Europe to the Far East overland.

There are a lot of roadworks going on on the Southern Route. Only a few years ago it was almost only a few parallel dirt tracks that was called the Southern Route; however, they’re now in the process of building perfect asphalt, and where it’s still not ready, it can be horrendous. The car was shaking very badly on these stages while our speed was only 10-20 miles per hour.

On these very bad parts, a rattle that was coming from somewhere around the roof-rack started getting more and more obvious. The loud noise let us know that something wasn’t right and was moving around. We stopped and I tried to check what the issue was, but couldn’t find any moving parts on the roof. I tied most of the bolts on the rack but that didn’t help either. It took us several attempts where I was standing outside on the rig somewhere while Evelin was driving slowly, and eventually discovered that one of the legs of the rack had cracked. It was right under the aluminum box.

It appeared that after 20,000 miles the rack had developed this crack, which didn’t seem too bad, even from a Front Runner product, because we drove on some horrendous roads in Africa and during this trip as well. But later I concluded that it was me who fixed the alu box in an incorrect way. Most of the weight of the box full of spare parts, recovery kit, spare oil, etc. was only supported by one bar, and it was more the violent shakes on bad roads that were the issue rather than the weight on its own. Had I fixed the box to a few more points on the rack, the shakes wouldn’t have been enough to break it.

In any case, voluntary off-roading, therefore discovering Western Mongolia, was now out the window. The roof-rack had to be welded before it got any worse.

Giampiero was already in Ulaanbaatar and he recommended a good workshop where they could weld aluminum, so we headed to Ulaanbaatar directly. It wasn’t ideal, but fixing this problem became a priority.

But Mongolia is not a country where you can decide when you want to do off-roading. The perfect tarmac can end any time and then a dirt track becomes the main highway until you find the paved road continues again. We got lost several times on the dirt tracks, including in the dark, but eventually we arrived in Ulaanbaatar. It took us about three days.

The last leg of the drive to Ulaanbaatar became very interesting. We started the day in bright, sunny weather but by the time we got closer to the city, it was raining very heavily. The road was flooded in several places and only 4×4 vehicles were let through at some of the worse spots.

It was late at night when we arrived and I thought it was very different from what I remembered in 2014. At that point it seemed like a quiet, undeveloped city, but now there were huge amounts traffic everywhere even at 11pm. Lots of new apartment blocks have been and are being built, while the road network within the city doesn’t seem to be able to cope with the flood of imported Japanese second-hand cars.

We wanted to stay in town in order to be close to the workshop where they would weld the roof-rack, but there was so much construction work going on around the hotel we booked that we couldn’t even walk there. At the second hotel we tried we couldn’t find a single parking space, but the third hotel was finally approachable and had secure parking, so we checked in. The fact that there was no hot water in the whole city due to maintenance seemed like only a small inconvenience after a tiring day.

Driving from Budapest to Singapore – The Last Episode