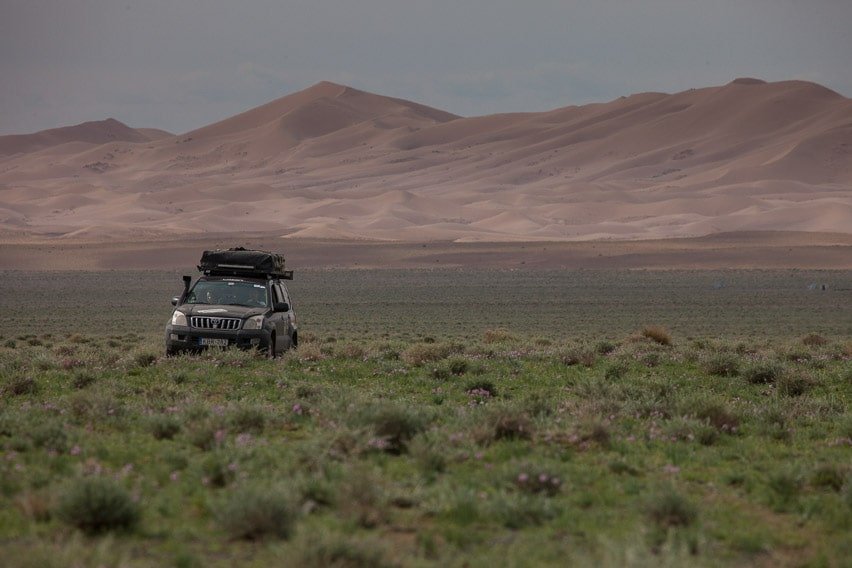 We were headed to Dalanzagdad where we’d meet Giampiero. Not far from the town the automatic transmission was doing some weird things. It suddenly shifted down to third gear and didn’t want to change back to fourth and fifth regardless of the RPM or the speed. Again, it was very worrying.

Giampiero had already spent a couple of days in the Gobi and we were going to travel together from the next day. I tried to show him the issue with both the starter motor and the transmission, but none of the problems appeared again.

We went to a mechanic straight away but the guys didn’t want to touch the starter motor. To be honest, I wasn’t that keen on them to start work on my rig either as they didn’t look like they knew what they were doing.

Besides, I couldn’t show them the problem either, so what I tried to explain about the issue might have been lost in translation.

We checked into a hotel and decided to stay two nights.

Lotte and Niels were on their way south from Ulaanbaatar with their newly obtained Chinese visas, so they were potentially joining us when we departed for the Gobi.

The problem with the starter engine really worried me. When the engine was still cold, the starter motor didn’t engage with the flywheel but only only produced a clicking sound, and the engine didn’t start.

After 4-5 tries it suddenly worked and the engine was running.

When the next day the issue seemed bigger and starting the engine was even harder, I went to three different mechanics in Dalanzagdad to try and get it fixed.

I researched a bit online and spoke to my Dad who knows a lot about mechanics, and with all the info I was pretty sure the starter motor only really needed a good clean. Unfortunately, I didn’t have the experience to do it myself.

None at any of the mechanics wanted to do the job, so I wasn’t really sure what to do. The town was close to the Gobi, very remote and undeveloped.

Although the car isn’t even close to a new modern vehicle, the mechanics work very rough and didn’t want to touch it.

We had two options: drive back 600 kms on the tar road to Ulaanbaatar and get it fixed at the official Toyota dealership or go to one of Chinzo’s contacts who could fix it.

Since it was a weekend, going to the Toyota dealership wasn’t an immediate option. We also didn’t have too much time until our entry into China so I didn’t really want to wait.

Chinzo’s contacts could have helped, but by this time Giampiero had also talked to a friend who worked on rally cars in deserts and very remote places, who told him that the kind of issue I had with the starting motor wasn’t really a big problem and carrying on would make more sense than turning back.

I could get it fixed in China when we got there and in the meantime, just keep trying to start the engine until it actually started.

Giampiero even offered to tow us through the Gobi, should the Toyota not start at all. I really hoped that would never happen and the next morning we set off westward.

Our first destination was Yolin Am, a beautiful canyon in its own right, but we were also expecting ice fields before we got there. We were told that there was ice in the canyon even during the summer up until last year, but this summer it’s all gone.

We really enjoyed the day though, now with two vehicles, as we carried on through a road that was actually a riverbed with water in it.

Giampiero spent the last few decades travelling the world and making documentaries, so apart from the brilliant stories he kept telling us about his travels and work, he also gave us some basic lessons in filming.

We spent quite a few hours going through the riverbed taking videos. It was a beautiful place and I can’t wait to edit the footage about our ride there.

Overlanding with two vehicles together makes a huge difference in many aspects. First of all it’s a lot safer.

That means you’re not in such big trouble when you break down or get stuck, but also safer as in from any danger.

Giampiero drives an expedition ready Land Rover Defender, that at this point looked more reliable than our Land Cruiser.

I was quite happy we wouldn’t be overlanding the Gobi Desert on our own and was also looking forward to being with the full group soon. Niels and Lotte were on their way to meet us around the sand dunes.