A Lot of Wild Camping and Some Manure 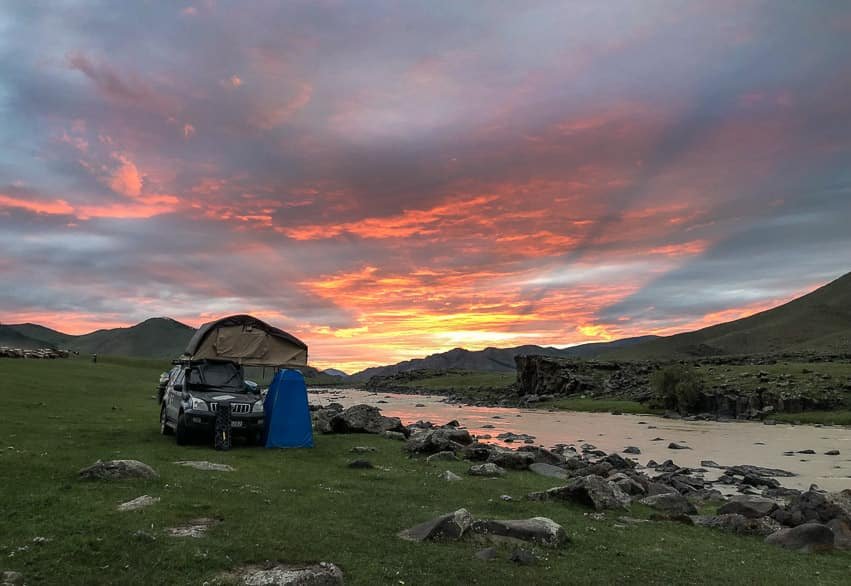 It was time to head out and leave River Point. The nine days we spent there were awesome. We had time to relax and stay put for a change.

The reason we weren’t in a rush anymore is because we agreed with Niels, Lotte and Giampiero that we would enter China on September 3rd rather than our original date of August 27th. The new entry date would give our Dutch travel companions a chance to discover a bit of Mongolia as they flew back to the Netherlands for 2 weeks and obtained their visa in The Hague.

We headed west towards Orkhon Valley. After some grocery and H4 headlight bulb shopping we were ready to hit the Mongolian countryside.

Driving west from Ulaanbaatar was basically the same route that Ash, Jon and I took in 2014.

Just as back then, Evelin and I drove about a couple of hours when we started to look for a campsite. It didn’t take us long until we found a truly perfect spot.

We chose a ridge between two hills so that due to some mild wind there wouldn’t be as many bugs as in the flat grassy areas.

We had a campfire that was only possible because we bought firewood in Ulaanbaatar. Where we camped, there wasn’t a single tree in sight.

The next day we reached  Orkhon Valley and had three awesome days wild camping next to the river.

We even found the same spot where Ash, Jon and I camped four years ago. It brought back some great memories!

At this place, where the river and riverbank was full of big boulders, we found a sheep that had gotten trapped under a rock.

For some reason the poor animal went under the boulder on one side but couldn’t get out on the other,and had been sitting in the hole for who knows how many days.

He’d already eaten all the grass around the hole where he could reach. We dug him out in about half an hour and although he was trembling at first, he seemed really happy to be free again.

Orkhon Valley has a lot of historical importance. During the reign of Genghis Khan, the capital of the empire, Karakorum, was located here.

No surprise the Khan put his seat in this valley. Compared to other parts of Mongolia with its vast steppes and windy mountain ranges, this valley is very welcoming.

Our next destination was south of Mongolia, where we’d originally planned to meet Giampiero to discover the Gobi while getting closer to our border crossing into China.

From Orkhon Valley we had to cross the mountains south of the river. It was beautiful, but we made pathetic progress. It was raining tremendously while the road was very rocky and challenging.

Muddy in some parts, I was really afraid of getting bogged down in one of the massive puddles while not being able to tell what the road surface was like under the water. When I say road, think of the worst dirt tracks you can.

That’s why I decided to go round one of the larger puddles and continue on the wet grass next to the ground instead.

Only the wet grass wasn’t really grass, but very wet and soft manure and mud. We got stuck immediately and very badly.

I got the sand mats and shovel out but there was nothing I could do with our limited recovery gear to get the car out from this situation.

We were both knee-deep in manure but our efforts were fruitless. A couple of guys on motorbikes stopped and tried to pull out the car by hand but it was never going to move by human power alone. We needed at least another 4×4 vehicle to pull us out either with our kinetic rope or with a winch, should they have one.

We had very little hope of another car going past, let alone a big 4×4. It was a remote area, it was getting late and I think we saw a total of two vehicles on the road before getting bogged.

I’d already resigned myself to the idea of sleeping on the front seats while all covered in crap and waiting until the next morning to ask the first UAZ to help us.

But we didn’t need to wait until morning. Half an hour later the most beautiful 100 Series Land Cruiser turned up. I couldn’t believe my eyes.

It was one if the largest vehicles that could’ve turned up on this road and when I waved with my tow rope, they stopped immediately.

Checking the depth of the river before crossing – Orkhon River

They were afraid to use the kinetic rope to its full potential. They only tried to pull us, rather than use momentum to drag us out, so it didn’t work.

That wasn’t a problem though, as the Land Cruiser was equipped with a Warn winch that worked like a dream. We were free again in minutes, and I was so happy I gave all of my beers to them as way of saying thank you. We even followed them to the next town to make sure we don’t get bogged down again on our own.

We drove all the way to Arvaikheer and took two showers each in the hotel where we stayed. After the manure incident as well as wild camping for 4 days in a row, it was good to have some comfort.

This doesn’t mean we were living like cavemen when we camped.

We set up the shower tent and by warming up river water over our fire, we actually had hot showers. We also have a toilet that I made from a cheap camping chair and using biodegradable bags and a shovel; a great budget solution that saves us space as well.

Dalanzagdad, where we were due to meet Giampiero, was still far away. The recent floods in Mongolia (including in the Gobi Desert) had a huge effect on the road (i.e. dirt track) system.

Roads got washed away, large, muddy and impassable patches appeared, and river crossings got a lot more difficult.

At every place where there was a slight possibility of getting stuck I was very nervous.

There was no traffic whatsoever, so if we’d gotten stuck, we’d have been on our own.

Massive flat areas made it possible for us to make good progress but then we arrived in Mandal-Ovoo, where there was a river in our way.

Even a couple of locals were discussing which would be the best way to cross, and there were people who just turned back.

The river wasn’t wide, but you could tell from the bushes and grass around the water that it was a lot deeper than usual.

But turning back wasn’t really an option for us.

I walked across the river and back at least twenty times to check how loose the ground in the riverbed was, and I was struggling to find the right line. The two very drunk guys trying to give me advice didn’t really help me in making a decision.

The ground in the middle of the riverbed was very loose, so I was pretty sure we’d get stuck. Getting bogged in the middle of nowhere in mud or even manure is a huge inconvenience, but it’s only a matter of time before you get out.

Getting stuck in the middle of a river with no help around could mean that would be the end of our overlanding adventure.

I nearly gave up and was ready to tell Evelin that we needed to turn back (she would’ve been very happy to) when I found a line in the riverbed that I thought was hard and stable enough for the Land Cruiser not to get stuck.

It wasn’t a straight line and that was probably the reason why the ground in that line hadn’t been loosened up by other vehicles crossing the river previously.

I plunged in and halfway through when I made a right turn in the river, I felt the truck stopping and the rear wheels digging in.

For a split second I imagined us losing the whole thing when the strong current of the river pushed the vehicle from its stationary position gave it traction again.

I was incredibly relieved when all four wheels were on high ground out of the river on the other side. It was very scary and I’m really glad the vehicle is capable of doing such a hard crossing.

Right after this river crossing we noticed that the starter motor didn’t turn over the engine immediately but made a clicking noise first.

I didn’t think much of it then, but later in the evening when I stopped the  car to check a muddy area in front of us, the engine didn’t start immediately. It was the second scary moment of the day because the last village we’d passed through was 15 miles away, and there was no traffic whatsoever on that road.

The engine started on the second try and we decided to sleep next to that last village, just in case we had issues with starting the car the next morning.

Unfortunately, this was only the beginning of the issues with the vehicle…