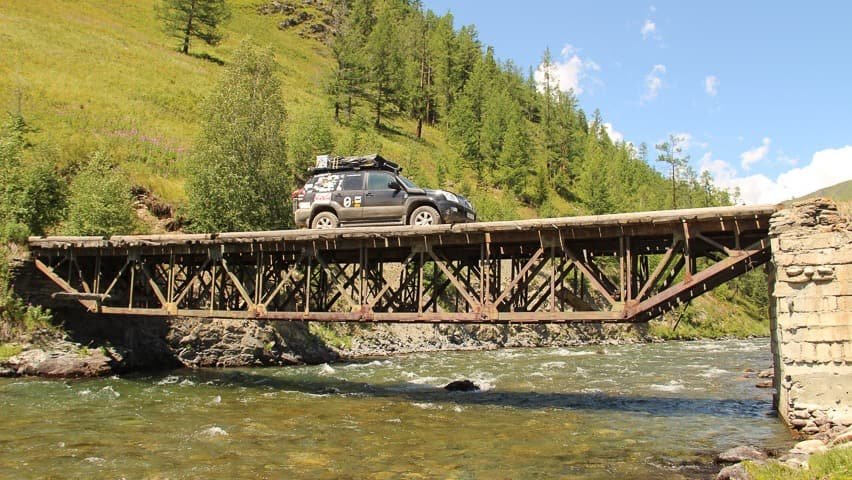 In Ust-Kamenogorsk (or Öskemen in Kazakh), we were quite close to the Russian border. However, we wanted to visit the Altai region of Kazakhstan and so we headed east. I was most interested to see the so-called Austrian Road, which snakes between Urunkhaika and Highway P-163.

We had a long way to go until Urunkhaika so we planned to camp at a lake at about the halfway point. At the lake, we finally had a small campfire and cooked our dinner on it using our best camping grill. I thought we’d have more opportunities for campfires, but so far that hasn’t been the case.

I hope to have more opportunities for campfires in Mongolia, though.Evelin was able to get some exercise done, and it was the first time during this trip that we used the lake to wash ourselves. It’s quite funny how you really feel like an adventurer when you wash in a river or lake. We had our best camping shower kit with us, but the lake felt more appropriate here.

We had an early morning start in order to be able to make it to Urunkhaika by evening. The ferry crossing on the Irtysh River took us about an hour and a half. Where we crossed it’s so wide that it looks more like a lake than a river.

East of the river it started to feel even more remote a region; gas stations were infrequent and even the ones we found were very old, run down and from the Soviet era. There was hardly any traffic and the villages were very quiet.

We’d been driving for several hours when we noticed a tall, very well maintained fence with barbed wire just a hundred feet from the road on the right.

We checked the map and, as we suspected, the fence was the border of China! China will be part of our trip, but we didn’t expect to see it so early. Just from looking at the map, we didn’t realize how close the road lies to the border.

From this point, the road turned into a dirt track and started to become quite spectacular. On the Chinese side there were incredibly large sand dunes, just like the ones we saw in Erg Chegaga in February.

The track leading to Urunkhaika already sets the mood for the experience a traveler will have there. It’s a gorgeous, untouched place where time stopped decades, if not centuries ago.

Urunkhaika is a small village on the shores of Lake Markakol. Giampiero, who recommended we check out this part of the country, told us to look for Galina, who had a shop in the village. She could help us find accommodation or a place to camp with our rooftop tent. That’s all we had to know and the first person to whom we mentioned: “Galina magazine” (i.e. Galina shop) knew what we were on about.

The old lady jumped into our truck and directed us through the rough dirt roads of the village to Galina’s shop.With the help of sign language and another lady jumping into our car, we ended up at a sort of guest house where we stayed for the night. They didn’t understand when we tried to explain we wanted to camp in our tent, so we just stayed in the house which was basically a very simple room and nothing else. It was just before sunset so we had a nice walk to the lake, after which we cooked a great dinner on our gas stove. I was looking forward to the Austrian Road the next day!

Above: Gas station in Urunkhaika

The Austrian Road is a windy, 37 mile-long (60 km) dirt track that was built by Austro-Hungarian prisoners of war from 1915-1917, who were able to use nothing other than hand tools like shovels, pickaxes and saws.

When it was built it had strategic importance. The road made it possible to transport goods and people through this far eastern territory of Kazakhstan.

The hard labour of the Austro-Hungarian prisoners created a track through an area that’s hard to traverse even in dry summer weather.

You definitely need a 4×4 vehicle as some of the bridges have collapsed and there are several obstacles that are difficult to get past without good ground clearance. You have to cross fords and rivers, and the bridges that still stand are also quite scratchy. In wet conditions or in the winter months, the track is completely impassable.

However, as they say, words can’t describe the road and pictures don’t do it justice. Drops of a few hundred feet are common and the road crosses the Kara-Koba River plenty of times. Coming from the south, you have to climb the Alatajsky and the Burkhatskly Pass before you can reach the main road in the Bukhtarma Valley in the north.

I can’t even imagine how hard it must have been to build this road 100 years ago with only hand tools. The 37 miles took us more than 6 hours of driving due to the hard terrain, but also because we had to stop so often to just appreciate the view. Evelin and I even talked about whether the Tusheti National Park in Georgia or the Austrian Road is the more spectacular. It’s hard to compare. I think the Tusheti still wins, but only by a very small margin. We headed back to Ust-Kamenogorsk, as we were due to cross into Russia the next day.