Overlanding in the Tusheti National Park 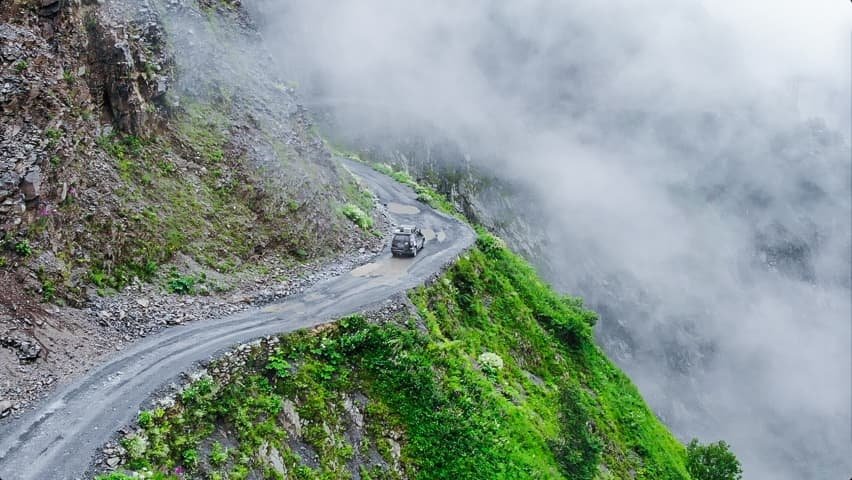 The Tusheti National Park is something very unique.

It’s only really accessible for about 5 months of the year, which is probably how it’s managed to stay so pristine and brutally beautiful.

The road leading up to Omalo, the main village up in the Tusheti mountains, goes through the infamous Abano Pass.

The road itself is among the most dangerous in the world, and in my opinion is even more dangerous than the Death Road in Bolivia.

Having experienced both (although the Death Road only by mountain biking) I think the road in Tusheti is much more dangerous.

The loose surface of the road, constant landslides, waterfalls and melting ice and snow even in the summer months all add to the intimidation.

The excitement of driving on this track pairs with a view that’s impossible to describe with words. I’ve said this a few times before, but I think that if this trip was only about seeing the best view possible, then we could turn around now and go home.

It would be impossible to top this.

The overheating issue came up a few times, naturally.

The constant switchbacks and steep uphill sections in 90 degree F temperatures (32 C) were too much for our knackered cooling system.

However, it was manageable and after hours of driving in this gorgeous national park, we were on top of the mountain and started our descent to the really remote part.

It was among the most enjoyable drives I’ve ever done! Better than any mountain roads in Northern Italy for example.

One indication of how dangerous this road is can be seen in the attitude of the local drivers; an attitude we hadn’t seen anywhere else in the country.

Several drivers slowed down and asked us if we were okay while we negotiated the narrow path trying to get past one another.

On any other road in the country, the drivers are reckless – I would even go so far as to say dangerous. Not here.

On Tusheti, we’d seen several memorials for people who fell off one of the high cliffs with their vehicle.

Omalo sits on top of a mountain at nearly 6,000 feet but still surrounded by other taller peaks. It’s a magical place.

We asked one of the guest houses if we could use their bathroom (which they allowed for a small fee) and set up camp overlooking this plateau with its horses, cattle and wild flowers.

There are no petrol stations, highways or anything like that up there. Every supply has to be carried up by small, 4×4 trucks.

In fact, since the foothills of the mountains, we didn’t see any vehicle that wasn’t 4-wheel drive (other than enduro motorbikes, of course).

I couldn’t stop looking at the view from our dinner table.

We were sitting in another postcard.