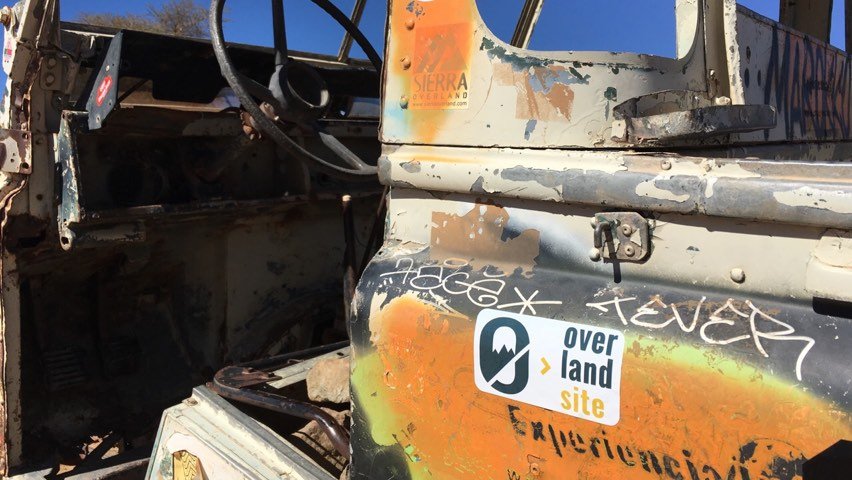 After a great breakfast in the morning sun, we packed our rig for the Erg Chigaga tour. From Mhamid you can do a round trip returning to Mhamid, but since we were heading north soon, we’d planned it one-way through the Erg Chigaga area, from Mhamid to Erg Chigaga and continuing through to Foum Zguid.

Ahmed showed us the planned route on the map and we were ready to go. He was driving the same type of Toyota Prado 120 as ours, although completely stock. He either takes other vehicles with him on the tours or takes passengers to Erg Chigaga and back to Mhamid the next day. This is how we met Owen, from Canada.

Owen is retired and has been traveling the world over the last 7 years, having spent very little time in Canada during this period. Don’t think of an elderly retired person though. Owen worked hard when he was younger and was able to retire very early to live a free life constantly traveling the world! Many people only dream about this kind of life, but don’t imagine it actually being possible. Well, it is!

The drive to Erg Chigaga took a few hours at a relaxed pace, with frequent stops to take photos as well as for a great lunch in one of the oases.

We came across a large field of rocket leaf right in the middle of the desert. Camels (dromedaries would be a more accurate word) were munching on the green field – it was a surreal view. The smell was like walking in a rocket salad.

We had a not very dignified arrival to the actual sand dunes of Erg Chigaga. I slowed down a bit so that Evelin could take some photos, and that resulted in us being stuck on a small sandy patch. I couldn’t even call it a dune, although Evelin was trying to then take pictures in a way that the sand patch looks taller and bigger. We got completely bogged and it took us 40 minutes to get going again. Our sandmats helped tremendously!

Once we were on the move, we arrived at the desert camp in 10 minutes. They had a permanent Bedouin-style camp set up right next to the taller sand dunes, although we still planned to sleep in our rooftop tent.

Once you’re here, the mandatory, touristy camel ride to the tallest sand dunes are totally worth it at sunset. It couldn’t be more cliché but the experience is quite amazing! Apart from the unique, beautiful views from the sand “mountains”, the sudden temperature drop right after sunset is what I remember most. It was quite chilly, so we were really looking forward to the hot dinner the hosts prepared for us.

What came after dinner was, however, the coldest night of the whole trip. We expected it to be very cold so we were wearing our skiing clothes as PJ’s, but even that wasn’t enough. On top of that, Evelin got a bit (quite) sick. We’re not sure why, as we both ate the same food, but for the next 2 days she wasn’t feeling too well.

I quite enjoyed the guided tour with Ahmed, mainly due to the added safety and because we got to meet Owen, but it is possible to drive to Erg Chigaga on your own. You just have to follow one of the tracks from Mhamid heading west and you’llget there. It’s hard to miss if you’re also using a GPS, maybe with some satellite images.