The Sahara Desert Used To Be An Ocean 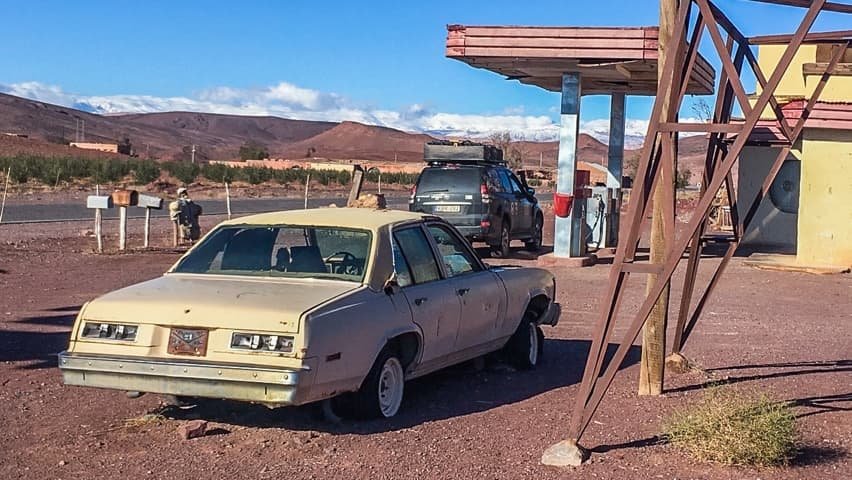 After a bitterly cold night in our rooftop tent, where even our skiing clothes were insufficient, we said goodbye to Ahmed and Owen and set off westward. Evelin wasn’t feeling well, so we didn’t have a great start to the day.

Ahmed explained how to get to the main road and even drew a map for us.

The drive through the rest of the desert area was fascinating. It started with very soft sand then gradually changed to gravel and rocky trails, with the surroundings looking like we were on a different planet. We even drove through a completely flat, dry lakebed.

The previous day when we’d stopped at an oasis, we were chatting to Ahmed when he casually reached down to grab some small rocks on the ground and show us that they actually contained fossils.

It was amazing to see something like that in its original environment rather than in a souvenir shop or museum. We read in our Lonely Planet that there are places around the area where you could find fossils, but I didn’t expect it to be that easy.

Well, it wasn’t actually, because I started to desperately look for my own find in that oasis, but didn’t succeed.

On this day however, after about an hour’s drive from the camp, we stopped to take some pictures and stretch our legs in an area full of small rocks – only to find that literally every single piece of rock was full of fossils.

The Sahara Desert used to be an ocean 10 million years ago, as you can read in history books. But actually seeing the fossils and in that kind of volume completely blew my mind.

There’s a checkpoint at the end of the tracks before you can enter the main road again where the poor soldier on duty asked if I had any alcohol. First I thought he wanted to check how much alcohol I had, as being a checkpoint, I thought we might not be allowed any in the area. I admitted I had one bottle left, to make sure I don’t get into trouble in case he checked our car, but it turned out he wanted it for himself.

Reluctantly I gave it to him, figuring I could buy some later whereas he was stuck in the desert without any shops nearby. It was an interesting encounter to have in a Muslim country, where people aren’t supposed to drink.

We made it back to the main road but again, it appeared that we had too much planned for one day. I wanted to go to the ski resorts of the High Atlas but coming right from the Sahara Desert was a bit of a distance.

We shouldn’t have done that; it was 1am by the time we arrived at our guest house that wasn’t even in a ski resort, as we couldn’t find accommodation in the town where we were originally going.

While on the road, we came across a movie set, the gas station from the Hills Have Eyes which was shot there.