Mauritania and the Dirtiest Town in Africa 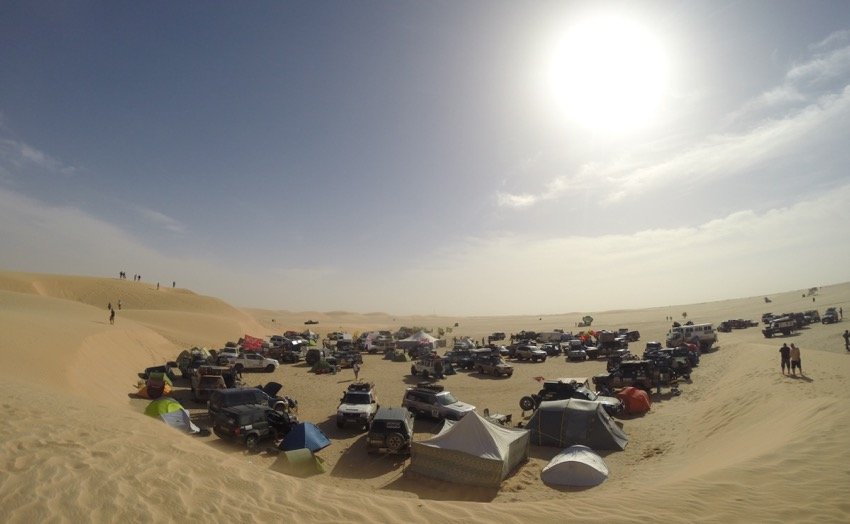 We started our day very early, leaving the camp at around 6 am. We were heading for the Mauritanian border, and knowing that another 130 cars had the same plans for the day, we wanted to make sure we weren’t going to be last in the queue.

It was still pitch black when we went past the sign for the Tropic of Cancer so we didn’t see it at all. Again, Evelin and I didn’t mind as we would definitely stop for a photo or two on our way back.

I have travelled extensively before, but never really had the nervous feeling I actually had on this day, knowing we were entering Mauritania. Reading official travel reports and new terror scares blown up by the media, you’re never really sure whether a country is actually dangerous or if it’s just politics. However, this time I heard from ralliers who’ve done the same route in previous years that even if it’s not dangerous, you just have to be careful in Mauritania. Our road book I mentioned earlier warned us about the country, listing instructions such as “never drive at night”, “don’t drive in convoys” and “if you don’t make it to camp just sleep next to a military checkpoint”. We ended up doing the first two, but more on that later.

We had a last fill-up on the cheap Western-Sahara diesel, and after a total of 3-4 hours drive we were ready for the border crossing.

Getting out of Western Sahara was just as chaotic as getting in to Morocco. I think our passports were checked 6 times at least. We were officially leaving the Moroccan-controlled part of Western Sahara. When you leave Morocco with your vehicle, you need the remaining copies of your D16 form that you used when entering the country.

Including the wait in the queue and passport and customs checks, it took us a good 3 hours to leave the country, only to arrive in a non-controlled part of the world that lies between Morocco (or how we see it, the Moroccan part of Western Sahara) and Mauritania.

This several mile stretch until the Mauritanian border is what even Morocco admits to be the Sahrawi-controlled Western Sahara. However, our impression was that it is completely lawless.

Hustlers and other individuals trying to change your leftover Dirhams keep attempting to stop you in the hopes of some business. The area wasn’t really welcoming so needless to say, we didn’t stop. Dozens of abandoned and partly dismantled vehicles lied beside the road everywhere. I wondered how many of these cars were on the stolen or written-off vehicles list of some insurance companies – my guess would be most of them.

The section starts with a smooth 3-mile road heading south, which disappears so suddenly that it’s not even continued by a dirt track. It’s just a pile of rocks and sand you need to tackle in order to reach the Mauritanian border control. Close to the end of this ‘no man’s land’ there is a poor guy flying some sort of Western-Saharan or Sahrawi flag, so that the UN actually maintains a constant station here in order to protect him. We saw quite a few UN-marked vehicles since Dakhla, so I suppose the peacekeeping operation is still very much needed.

At the Mauritanian border control, every rally team was greeted by a few people in army uniforms who only wanted to know our rally number – no passport checks, no nothing. We were told to go directly to our dedicated bivouacs (in the middle of the desert), where we would have our visas issued and passports checked. We would even have the opportunity to exchange Euros to local currency. As we later learned, this was a ‘curse in disguise’ – or maybe more like a con in disguise.

Before heading to the desert camp, we decided to have a look at the infamous port town, Nouadhibou. Nicknamed ‘The Dirtiest Town in Africa’, Nouadhibou lived up to its reputation. It seemed that the non-finished or ruined buildings and rubbish piles were interrupted only by the millions of workshops trying to keep 30-40 years old European-made cars alive. We didn’t actually think it was dangerous at all, but we definitely drew a lot of attention as we rolled into town. Alex and Kurt with their nice looking Defender didn’t feel comfortable though, so they left and told us they’d wait outside the town.

We had a quick drive around then headed for the bivouac, still on time for some sunshine and hopefully a nice camp meal. We were really looking forward to some camping with great company and warm weather.

After about an hour’s drive from Nouadhibou, we arrived in the area where several dozen cars from the rally had already set up camp. It was a great view with awesome vehicles lined up, tents set up, cookers fired up and some sand dunes in the background. What made us aware of the fact that we were not in the Mojave was the Mauritanian army vehicles looking after us from four sides of the camp.

After setting up our tent and cooking a not very well made pasta dish, we went for our visa that was processed in one of the large tents set up by the authorities. It was weird to see officers working on computers in the middle of the desert. The authorities made it easier for the rally to enter the border by setting up this temporary visa issuing tent, although they (or the organizers) also conned us on having to pay double for our visas and a much-worse-than-official exchange rate when we bought our Ouguiya.

I had great expectation for this camp, and with our little group we had a fantastic time. Later I learned that this is where the ‘Tesla-gate’ happened, which on top of the ‘Visa-fee Gate’ spoiled my memories of this place a little.

I had great expectations for this camp, and with our little group we had a fantastic time. Later I learned that this is where the ‘Tesla-Gate’ happened, which on top of the ‘Visa Fee-Gate’ spoiled my memories of this place a little.