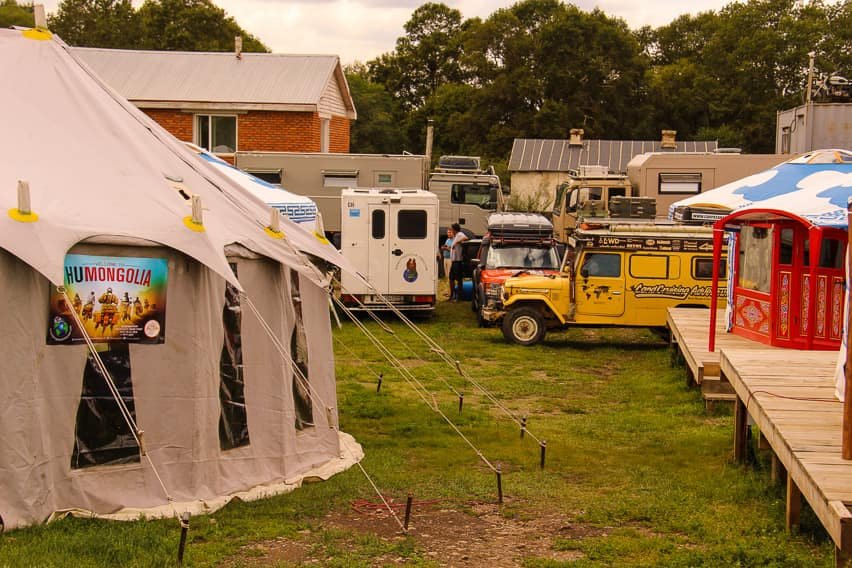 We met Giampiero at the workshop that he recommended to us where they could weld our roof rack. Finally we met the whole team with whom we’re going to cross China with.

Niels and Lotte was supposed to be in Ulaanbaatar too, but the same morning they had to fly back since  their visa application got denied for reasons none of us understood. It was a very stressful moment for them, as the best solution they could find was to fly back to the Netherlands and apply for the Chinese visa there.

At the time of this writing though, we know they’ve successfully obtained their visa, so we’re all really looking forward to discovering China overland with our own vehicles.

The guys at the workshop did a good job welding the rack, from what I can tell. Apart from the welding itself, I’ve done most of the work myself.

The roof-rack didn’t have to be removed, only the rear section had to be taken apart. This is one of the advantages of a modular roof-rack!

Before going to the workshop, we went to the city centre to have some breakfast and try to find a good camping shop in order to stock up on gas for our stove.

There was crazy traffic again; the street looked like a carpark. We couldn’t find a proper parking space so Evelin had to stay in the car while I ran around for breakfast and tried to find a camping shop.

This is when we met Natalia and Marc. They came to say hi because Marc noticed the large Euro4x4parts sticker on our rig.

Marc is fully sponsored by them, while we also received great sponsored products from the company. Marc has an extreme amount of experience in overlanding and off-road driving and his Troopy must be one of the best equipped rigs of its type.

Natalia was one of the main organizers of the Horizons Unlimited meeting that happened the following weekend.

She’s from Chile and has been traveling around the world solo on her motorbike. How cool is that!

The Horizons Unlimited meeting was going to be held at the River Point camping and guest house just outside Ulaanbaatar, and since we didn’t have a plan on where to stay we decided to go there and check it out.

We had enough of the standstill traffic of the city and the lack of hot water.

River Point turned out to be a fantastic place to stay. The staff speak English, the place is very well thought out, and it lies in a perfect spot overlooking hills and a river. It turns out that Altai Point where we stayed in Öglii is run by the same guys.

They’re both owned by Chinzoo, who also runs Drive Mongolia. Chinzoo is an experienced overlander and adventurer. He’s in the center of all things connected with overlanding in Mongolia. If you run into any trouble with your vehicle, he’s the one who can sort you out anywhere in the country.

If you just want to fly to Ulaanbaatar in order to rent a vehicle and discover the country that way, you can rent a 4×4 from him with all the equipment you need.

Whether it’s a group or solo trip, motorbike, UTV or 4wd vehicle, Chinzoo is the one to ask.

The weekend was approaching and overlanders started to arrive. Some of them came specifically because of the HU event, others just because they’d already heard of River Point.

A couple of really nice expedition trucks arrived, as well as quite a few nicely built Discoveries, Troopies and two other Land Cruisers. There were several overlanders on motorbikes too.

One of the most experienced and probably one of the most famous overlander couples, Karin-Marijke and Coen from Landcruising Adventure, were also at Altai Point with their 45 series LC. I’ve been following their blog and social media for a while now and was really chuffed to meet them in person.

Karin gave us a tour around their vehicle but the whole weekend wasn’t long enough to hear their great stories from 15 years of overlanding. We hope to meet them again on the road somewhere in the world!

The Horizons Unlimited meeting over the weekend was simply great. We heard (and watched a short documentary) about Marc’s great adventure in Kamchatka, when he and his girlfriend drove their Troopy completely on their own into the wilderness.

They even turned their rig on its side but managed to save the situation the next day and return safely.

Chinzoo talked about his venture through the frozen Lake Baikal with a 2-wheel-drive sidecar Ural motorbike. Even listening to this story was frightening.

There was a lot of information exchange and just a really nice atmosphere all around. Meeting all these people who travel for month or years was very inspiring!

They were on their way from Australia to Europe with their awesome Troopy, so basically doing a very similar trip to us, but heading the opposite direction.

/2020 update: Reni and Marcel are continuing to discover the world with their Land Cruiser and currently they are in South America. That is some great effort!/

After the weekend, the guys at River Point had a plan to take the buggies and a couple of motorbikes to the Genghis Khan statue off-road, so that Marc could take some photos of the 1-day adventure to be used as promotional images for the UTV and motorbike rental business at River Point.

We tagged along and not a single part of the day turned out as planned. I was riding a 650 Transalp while Evelin took one of the buggies with Marc.

We headed west from Mongolia and I was really keen on riding that bike all day. I don’t have a huge amount of experience with motorbikes but am always very excited when I have a chance to ride one.

The complications started when Rene got stuck in the river with his utility terrain vehicle. Due to the recent rainy weather all around Mongolia, the water levels in rivers and lakes were much higher than usual, so Rene underestimated the river a little and got stuck very near to the other side.

We all had to just jump in and push the UTV out, as it didn’t have a winch. We were all wet and cold, but I have to admit it was a lot of fun. However, this was only the start of the complications. An hour later the chain on Natalia’s bike suddenly snapped.

With no spare parts with us, we had to leave the bike at a nearby yurt so that we could continue riding to the statue. Natalia was riding with me and with so little experience riding a 650, I was a bit worried about taking a passenger.

Later in the day we actually fell, but luckily we weren’t going fast at all.

As I mentioned, nothing went as planned on this day and after our very late lunch, the rear right suspension on Marc and Evelin’s UTV simply fell apart.

The shock absorber just jumped out of its place for no apparent reason. It took us about half an hour to put it back together and we were on our way again, joking that perhaps there would only be one vehicle by the end of the day that would make it back to River Point.

We may have jinxed it because on our way back to the camp, Rene got stopped by police, and since they found some made up issue with his driving license, they confiscated the utility terrain vehicle he was driving right away. It was shocking.

Eventually, only my bike and the other UTV made it back out of the 4 vehicles that left the camp that morning.

It was a fantastic day, though! It appears that in Mongolia, things don’t always go as planned!