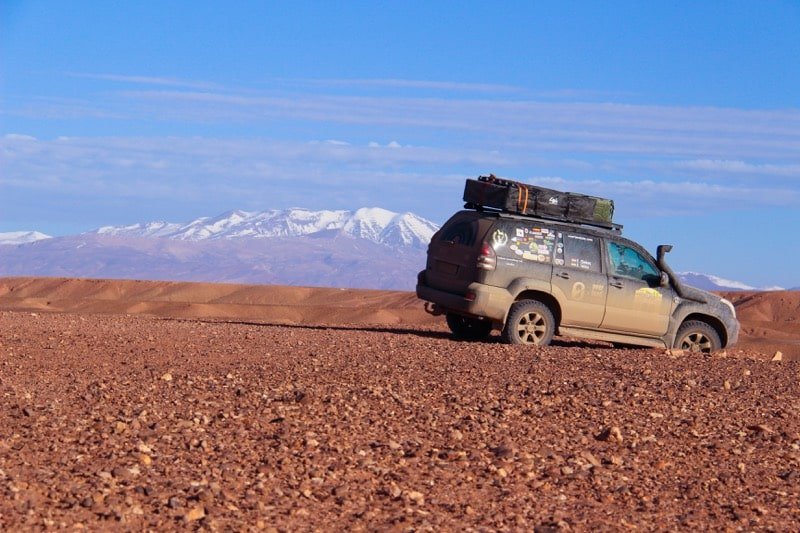 I’ve done some research around the definition of ‘off-roading’ or ‘off-road driving’, and there is a debate on where can you draw a line between on-road and off-road. I don’t think we need to necessarily define them and put them in their own box, because some non-paved roads (i.e. roads that appear on official maps and are part of a country’s road network) are quite often better and smoother than the actual paved roads in the same country.

I’ve seen them in Mongolia as well as in a couple of countries in Central Asia, and this is quite a phenomenon in North-Western Africa too.

I consider (you are welcome to disagree with me on this) non-paved road driving to be off-road, although I don’t claim that in those cases the driving gets as tough as rock-crawling or driving on a challenging trail.

On this day, most of our drive, at least until it got completely dark, involved off-road, non-paved road driving. Some parts were rougher than others, and it was just brilliant to overland through the area where the route took us. I keep repeating the words ‘amazing scenery’, but even these are insufficient words to describe the true experience you’re feeling when traversing Morocco’s back country roads.

Our surroundings varied from rock formations and dry or just about wet riverbeds to picturesque villages and oases. The pictures can give you a sense of how beautiful this country is rather than me trying to describe it.

Movie set of the Kingdom of Heaven

The stage started in the Atlas Studio where we had a chance to look around properly before we set off. Some major movies were shot here, including Lawrence of Arabia, Gladiator, Sahara, Babel, Kingdom of Heaven and Spy Game, just to name a few. It was surreal to walk around these movie sets, let alone drive.

We were heading to Tazenakht on a bendy road full of sharp stones. We aired down the tires a little to avoid potential cuts, but otherwise it was a smooth drive. I carried on with the same, slightly lower tire pressure all day (2.2 bar / 32 psi both front and rear from 2.8/40 front and 3.0/43 rear), which seemed to work just fine for the truck.

Airing down before a rocky section

Other than a great grilled chicken in Tazenakht, we haven’t really stopped all day, but we enjoyed driving so much that we didn’t really want to stop anyway.

Our convoy stuck together throughout the day, only splitting once when half the group took an alternative route around Tata.

Eventually though, we ended up at the same intersection when it was time to decide whether we were actually going to drive to the dedicated campsite and hotels, or else find ourselves different accommodation nearby and join the rally again the next day.

We were supposed to drive to Tafraoute, but we were miles away from there when it started to get dark. We opted for a nearby hotel called Borj Biramane in Icht that Jim recommended, having travelled through here 2 years ago.

It was a great choice, with warm rooms and cold beer. Evelin and I didn’t mind missing out on Tafraoute too much, as we planned to visit the town on our way back.

It’s supposed to be an overlanders meeting point, or maybe not so much meeting point as a place that many overlanders visit in Morocco. There’s even a place called the Valley of Vans nearby.

So our itinerary was Ouarzazate-Tazenakht-Tata-Akka-Icht. I’ve got the whole itinerary saved thanks to our Bad Elf GPS logger, so if anyone needs some route recommendation, I would be able to give the actual coordinates.