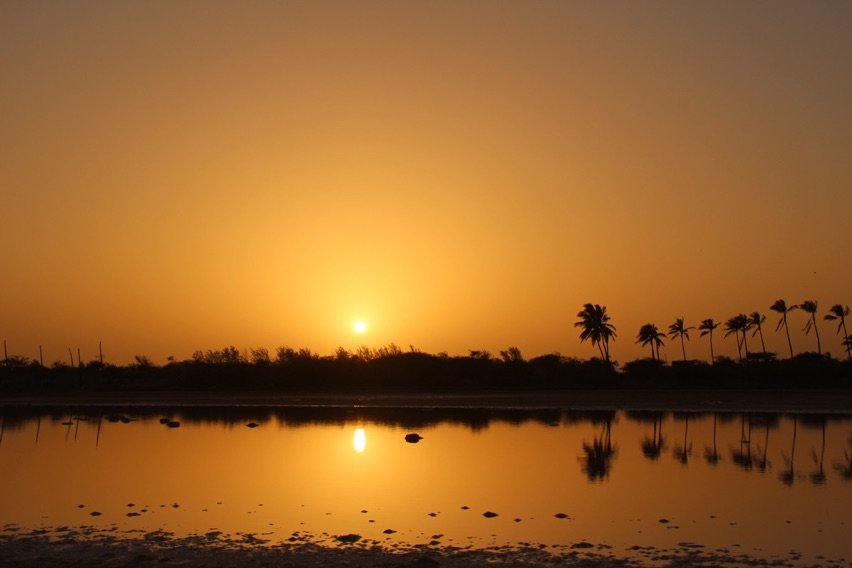 Nouakchott wasn’t supposed to be on our off-road tour itinerary, so we had to plan our own route for this day in order to meet up with the rally teams again. It was still the three of us together: Mate and Aliz in the Porsche, Gyuri and Jim in the Discovery.

We were going to enter Senegal later that day. That meant beer again and a much more pleasant climate. I was looking forward to it.

Our goal was a campsite called Zebrabar, near St. Louis, but first we needed to get out of Nouakchott. It turned out to be a bit of a challenge to find gas for the Porsche. In Mauritania, virtually every vehicle is diesel, perhaps due to cost, so gas stations rarely sell anything else. After filling up though, we were heading south towards the border but also wanted to do some off-roading before we got there. We turned off the road towards the east and drove into the desert that was slowly showing some signs of vegetation as we approached the southern end of the Sahara desert. Going past unbelievably poor villages, we concluded that you just can’t get used to seeing how poor people are in this part of the world. Reading up on it before you set off or watching documentaries about the area doesn’t prepare you at all for what you will see in person.

Just before the corrupt border crossing – where they take the opportunity to make you pay 10 Euros for every single stamp and passport check – the road snaked through a beautiful national park with pelicans, flamingos and other animals I can’t even name.

Entering Senegal was somehow relieving. I can’t really explain why, but I just had a feeling I wanted to leave Mauritania. I think it may have been differences like seeing cultivated land or people playing soccer or jogging by the road. You never see these in Mauritania but you don’t realize what’s missing until you see it again somewhere else. I never knew seeing some plantation by the road would make me so happy.

St. Louis was established in 1659 and was the first permanent French settlement in Senegal. It served as a colonial capital for centuries. The architecture of the old town also suggests a rich and interesting colonial history.

When we arrived in the Zebrabar campsite it looked like a festival. There were at least 60-80 overland rigs; roof-top tents were setup and camping gear were fired up. The bar was full and many beer bottles were empty. I guess it wasn’t only we who were happy to be in Senegal after the adventure in Mauritania.