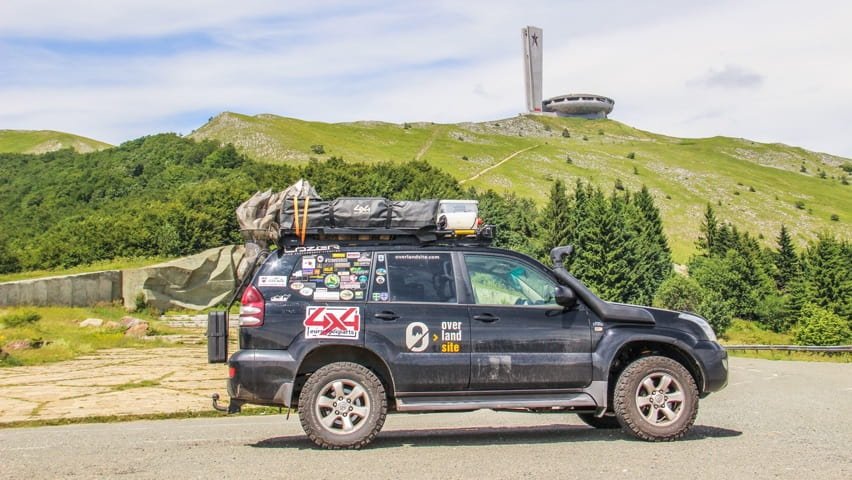 While heading for the Turkish border in southeast Bulgaria, I realized that we actually made quite good progress.

Our only deadline during the trip is August 27th, when we enter China and meet up with the tour company at the border, but we’ll probably catch up with Lotte, Niels and Giampiero before that somewhere in Mongolia.

They are the overlanders we’ll be crossing China with.

While we’re not in a rush at all, this deadline is always at the back of my mind so I’d like to make good progress in this first part of the trip – especially while we’re still in Europe, since this region is very easy to discover further any time in the future.

Covering good distance now also means we can have some really relaxing days later on during the trip, when we can go hiking or rent a bike or something similar.

Not to mention having extra time to deal with any issues we may have with the vehicle, just in case. Touch wood, the Toyota is performing very well so far. I love this rig and really trust it!

When we drove across the Carpathian Mountains in Romania, we came across the heaviest rain I’ve ever experienced in my life, and right in the area where we planned to wild camp.

The alternative was going to be to find a hotel in Giurgiu, right at the Bulgarian border, but we noticed on Google maps that there are tons more options in Ruse, Bulgaria, and so decided to actually cross the border and spend the night there.

Ruse is a surprisingly popular town among travelers, and it wasn’t easy to find a hotel with vacancy but we managed eventually.

After a good night’s sleep, we headed for the Buzludzha Monument. I’d heard about it before and seen pictures, but seeing it firsthand was more impressive than I thought.

Or maybe shocking would be the better word. This concrete monster had been built at the top of a mountain and served as an entertainment, meeting and conference venue in the eighties for the communist leaders of Bulgaria.

It also had a visitor center so it was open to the public. Today it is completely abandoned, with a lonely guard protecting it against being vandalized even more.

After the quick visit to Buzludzha, we were on our way to Sozopol, a small holiday town on the Black Sea Coast.

It was almost 10pm when we pitched our tent and cooked dinner.

When opening the rooftop tent, I noticed that it doesn’t actually open properly.

I noticed the same issue on out first night camping in Romania, but didn’t think much of it.

Now I wanted to find out what the issue was. It turned out that the brackets and bolts holding the awning in the back are getting in the way of the rooftop tent opening completely – definitely a headache I didn’t need.

Either the tent or the awning had to go from where it was mounted, or the awning needed to be attached with different brackets, such as the ones Front Runner sells separately but didn’t have in stock at the time I ordered the awning.

I even considered ordering the brackets (now they were in stock again) and having them couriered to the campsite. This wasn’t the solution, but I’ll continue from here in my next post.