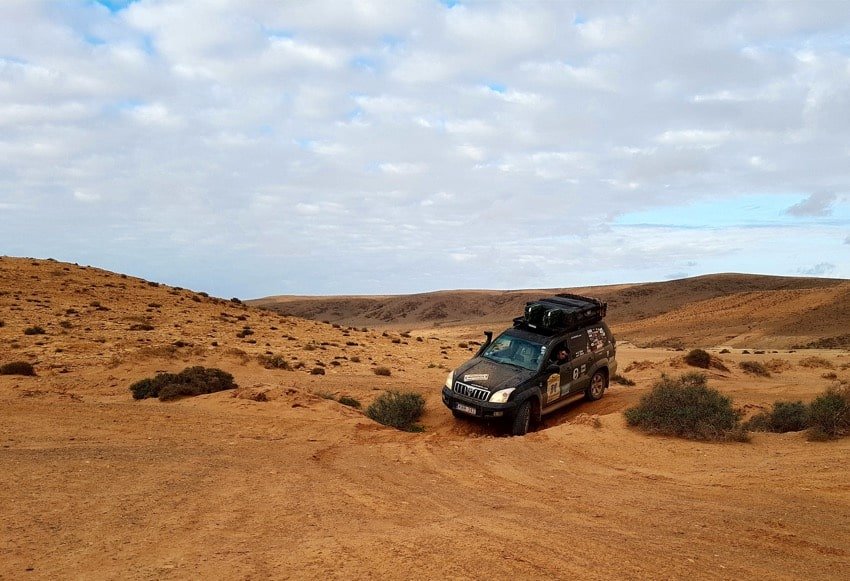 Our goal for the day was Laayoune, the Capital of Western Sahara, about 360 miles from Icht. After quickly washing the mud off of the windscreens, we left the hotel, driving west towards Plage Blanche.

The Plage Blanche is at least a 40-mile long white sand beach tucked between the Atlantic Ocean and the Sahara Desert – but the best thing about it is that you are actually allowed to drive on it. Sand dunes and pebbled sections interrupt the beach sand so you have to watch your speed, but otherwise, it’s a lot of fun driving right next to the Atlantic Ocean.

One of the biggest risks of beach driving is the wet sand (too close to the water) that gets you bogged down pretty badly. The water can quickly wash out the sand from under the wheels if you slow down or stop, and getting traction again can be very difficult or even impossible. Try not to drive alone in those situations. One of the teams got stuck, but there were quite a few other trucks around so one of them was able to help them out.

Unfortunately we couldn’t use the beach as a highway because it only had one road entering from the plateau above, so once we realized the high tide was coming in swiftly, we turned back and made our way to the same rocky path that lead back to the main road. With the tide already flowing onto the beach in some sections, we had to drive quite fast through the little rivers that the tide had formed. There were a few scary moments and it felt like if we had waited a bit longer, we wouldn’t have been able to find the road exiting the beach – though we did get to see some ‘great escapes’ ten minutes later! We were watching from above where you could see the whole area, and we really thought some of the trucks would be caught by the tide. They didn’t see us trying to direct them to the right spot to get away from the tide, but luckily no one got stuck at the end.

Going south from Plage Blanche we had a two-hour, painfully rocky section ahead of us, but the upside was that we saw the first camels of the trip. We lost quite a lot of time here, so after this part we just took the highway in order to arrive in Laayoune before it got too late at night. We didn’t know yet that we would have to get used to some very late camp/hotel arrivals over the coming days.

Heading for Laayoune meant we would be crossing into Western Sahara, which if you look at most maps is shown as another country south of Morocco, even if it’s only separated by dashed lines. As it turns out, Western Sahara’s situation is very tricky. You can read the detailed history here but basically, following a war with the Polisario Front, Morocco today maintains de facto control of most of the region, with only a narrow section governed by the Polisario Front. In the whole world, there is only one country that officially considers Western Sahara to be part of Morocco – and that’s Morocco itself.

In fact, when you cross over to Western Sahara you don’t really notice it. Fuel gets a lot cheaper suddenly, as the government tries to incentivise people to move south by reducing tax on goods and fuel. You can also see newly built ghost towns that have failed to attract any sizeable population. It’s both a little bit depressing but very interesting part of the world.

After hours of driving on the narrow highways of Western Sahara with constant truck traffic, we arrived in Laayoune where we were supposed to camp next to a beachside hotel. However, it was again too windy and cold to do that so we ended up getting a room in this horrible hotel. I don’t usually care about hotels and am happy to stay in very non-fancy places, but this hotel was not cheap or even clean. We ended up carrying our small camp cooker to the room to warm up some canned food. It was delicious!