Top 5 Places to See in Georgia 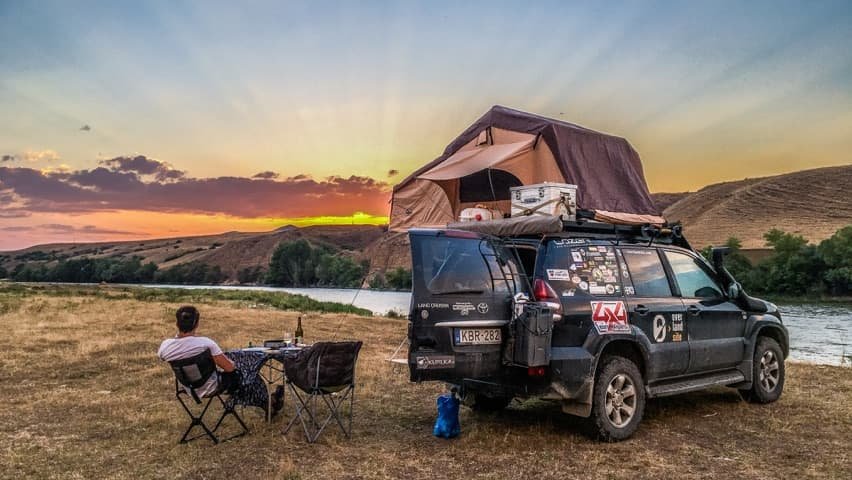 I think the top 5 places to see in Georgia are:

Of course there are plenty of other great attractions, but for the limited time we had in Georgia, we narrowed the list down to these.

So after spending a bit less than 2 days at Mount Kazbegi, we were driving south again to Vardzia.

Looking at the map later, we discovered that we could have saved quite a few hundred miles and a couple of days drive if we’d only taken the border crossing at Vale instead of Sarpi. That way Vardzia could have been just a stop on the way to the Toyota Service in Tbilisi.

The first upside of the extra miles was that we discovered a great wild camping spot (with iOverlander, as always) just next to Gori. The dead end dirt track lead us to the shores of the Kura river.

The flat, clear area looked perfect for camping or even a picnic for people from nearby Gori.

Unfortunately, after we stopped we saw the place must be popular, as a large area by the river was covered with plastic.

We still had a great evening there and tried out both of our camping showers; the classic shower bag and our 12 Volt shower with an immersible pump. We’d used the shower bag before, but not the 12 Volt one. I was quite pleased with how well it worked, along with the sponsored shower tent we got from Euro4x4Parts.

Aspindza is a town about 20 miles away from Vardzia. We planned to stay there for a couple of days so decided to stay in a hotel, as there were no campsites around town. We made a mistake by not driving all the way to the Vardzia caves, as there would have been some very nice spots to camp at.

Vardzia is an underground (fortified) monastery that was built in the 12th century under the reign of King Tamar (she was crowned as a king, not a queen!).

In the 12th century the kingdom of Georgia was constantly under threat by the Mongol Empire. To help her people avoid the Mongol onslaught, Tamar ordered the construction of an underground sanctuary and they secretly started building this fortress under the Erusheli mountain.

Walking through the remaining caves, it’s hard to grasp how massive a job it was to build it. Apparently Vardzia helped save the Georgian lifestyle and culture from the invading Mongols.

This cave fortress eventually had 13 levels built. Among its thousands of rooms was a throne room, a reception chamber, a meeting room, a bakery, a forge, chapels and a huge church. The only way to get to this underground city was through a secret tunnel which started at the nearby Mtkvari River.

The monks designed an irrigation system in order to be able to farm the land (terraces) just outside the caves, so Vardzia was completely self-sustaining. They were not only producing food though. From the remains of this large complex it’s clear that the monks loved their wine. According to archeologists, they had 25 wine cellars containing 185 wine jars.

Unfortunately, 100 years after its construction, an enormous earthquake ripped the mountain apart and two-thirds of Vardzia was destroyed.

Still, the remaining one-third that you can see today is still a unique experience. You can’t stop wondering, how did they build it? How much work and how hard was it?

After Vardzia though, I was very keen to drive up north again to a town called Telavi, because this was where we could start our drive up to the Tusheti National Park.

Since we’d already crossed the country twice now, going back north I didn’t want to drive on the same highways again, so we looked at the map and chose some country roads. This was one of the best decisions we made so far during the trip. It was mostly an off-road trail and took us through places that you probably can’t find in guide books. Some parts of the road were atrocious, where we couldn’t drive faster than 10 miles an hour.  Other sections, however, were very enjoyable and the scenery just added to the experience. It was like driving in a postcard!

Telavi lies in the wine producing region of Georgia, and we were eager to try some of the local wines out. We went to the Schuchmann Winery where we knew they’d actually let us camp and we could have a great dinner with wine tasting too.

I couldn’t wait for the next day, when we were due to drive to the Tusheti National Park.