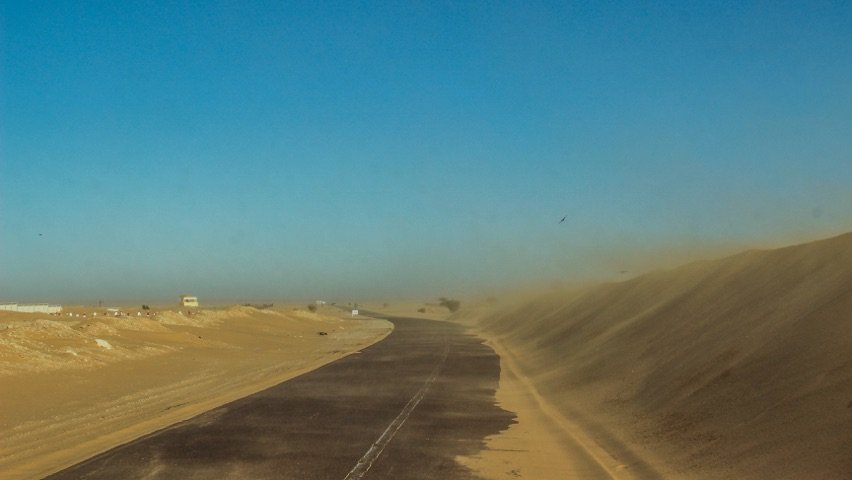 The Sahara Desert at sunrise is truly spectacular. The colors you encounter and the shadows of the sand dunes make it look like a scene from a movie.

We had an awesome drive… until a sand storm hit us. On top of the fact that we were driving through some really depressive towns in the middle of nowhere, the wind started to get far stronger. It got to the point where it was hard to see where the road was, as the sand was completely covering it. when it was blown over.

We arrived at the border around noon and as usual in Western Africa, were met by another helper. He actually was quite helpful though, running in and out of customs offices for us and at the end asking for only €20 per car. I thought this was worth it, but the fact that we didn’t ask him – he just started to run around with our passports – meant that we were put in a situation where we would eventually have had to pay for his services regardless, even if he had asked for €100. Luckily, that didn’t happen.

Now we were back in the lawless land of non-Morocco controlled Western Sahara, where even roads don’t exist. We drove past the insurance-fraud-car-wrecks again, and after a 3.5-mile drive, we started the long, bureaucratic process of entering Morocco again. This required a new D-16 TER form, customs checks, and 3 million stamps on an equal number of documents, but after about an hour we were on our way to Dakhla.

In the same way as when we were driving south, entering ‘Morocco’ again (or as it should truthfully be called, Western Sahara) was a relief after Mauritania; it just seemed friendlier and much more developed.

We stopped for a photo at the Tropic of Cancer and soon arrived in Dakhla. Evelin and I decided to have a rest there, so we checked into a cheap hotel, the Dar Dakhla. It’s a very basic hotel, but good value, and while it would have been great to camp instead, we thought it was just too cold and windy to do so.

We said goodbye to the Porsche, as Mate and Aliz decided to drive through the night. Mate had a meeting to get back home, and since they couldn’t sell the Cayenne in Banjul they now had to make good progress while driving home. We only found out later that the driveshaft in the Porsche just gave up, and they had to do a major repair in a workshop around Agadir. They then had to fly back home to make it to the meeting on time, so at the point of writing this, the Porsche is still waiting for Mate and Aliz to return to Morocco so that they can drive back someday.