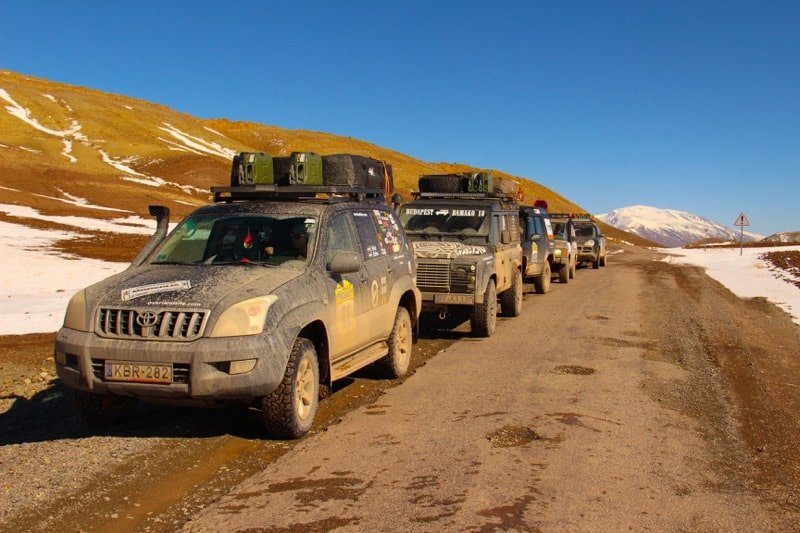 Today’s stage was Midelt to Ouarzazate. We started very early, at around 6.30am, and headed for the off-road tracks and river beds. The previous day’s drive was really nothing compared to this one. Sharp rocks on the tracks, snow, huge drops, sunshine and nearly dry riverbeds made the first half of the day unforgettable.

On this stage we happened to drive together with 4 other vehicles that ended up being in our convoy until the end of the rally.

There was Axel and Kurt from Germany who we’d met on the previous day, Mirek and Tomas from the Czech Republic with their Land Rover Discovery, Gyuri and Jim from Hungary and Holland also with their Discovery, and Aliz and Mate from Cuba/Hungary and Hungary with their Porsche Cayenne. Yes, a Cayenne.

The four of us, the 2 Discoveries and the Porsche kept pretty much the same pace, but later in Mauritania Axel and Kurt found us a bit slow and so understandably decided to join another couple of cars to drive with.

It was an exciting day, coming across massive oases​ at the edge of the desert and the Atlas Mountains. Some of the dirt tracks had been blocked by minor land slides, where we either drove on through the top of them or ended up driving around them in river beds.

It was the first time I truly experienced the off-road capabilities of our Land Cruiser 120 (Prado 120 in most countries, Lexus GX470 in the USA). The upgrades I went for were necessary and completely worth the money, which were done by Off-Road Hesch in Austria (a highly recommended workshop!).

I went for a suspension upgrade, getting rid of the air suspension in the back, under-side protection for the engine and transmission, and snorkel for cleaner air intake.

Again, I will write a separate post on the vehicle itself but long story short, the modifications were brilliant. I think I could have done much more (and I will!), but with its current state of modifications it handled pretty difficult situations amazingly well.

By the way, some of the most difficult situations were tackled by Evelin.

The stage was long, and we skipped the last third of the off-road sections and headed for Ouarzazate, where we were supposed to stay in a bivouac (‘tent camp’ in French) in front of the Atlas studio’s move set.

It was quite windy and not a very welcoming site in the dark, as there weren’t many people there when we arrived and no tents were set up yet. Still, we thought, “if this is in the road book, we sort of have to do it to experience the rally properly” – or as Axel put it, “we have all this new equipment, we need to use it..”

However, just as we were opening our rooftop tent, a security guard arrived from the nearby Atlas Film Studio and told us to follow him to the actual studio, as due to high wind and perhaps security, the location of the bivouac had been moved to inside the walls of the studio.

That’s how we ended up setting up our tent not far from an F-16 fighter jet. Well, okay, a replica of one.

We had a quick dinner and went to bed. The temperature seemed okay to stay in the rooftop tent for the night.

Scroll down to see the F-16 hiding between our rigs!