The Dangerous Roads of Mauritania – A Terrible Day 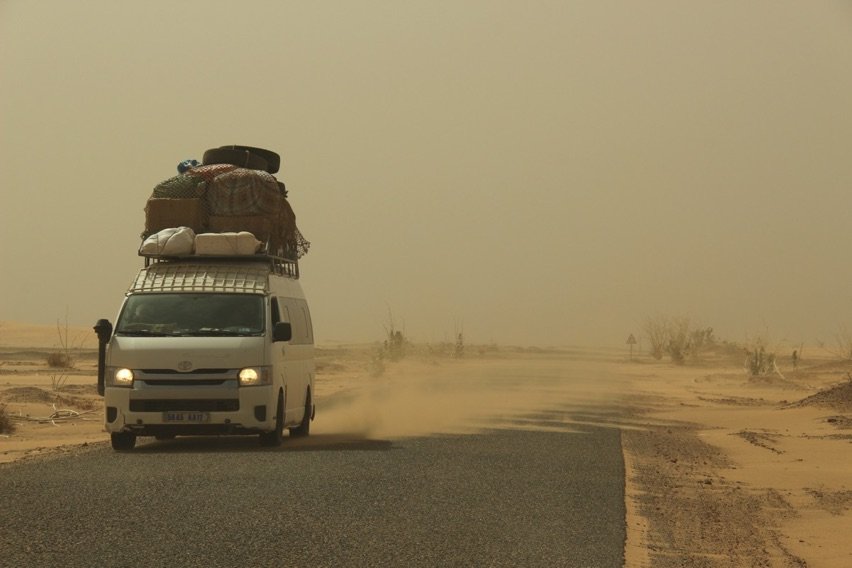 The off-road stage that followed the very difficult Sahara Desert section from the previous day would be similarly difficult, we were told. Hence, we decided to skip the off-road section and head straight down to the capital city, Nouakchott, on paved roads.

The off-road stage from this day was supposed to be one of the most spectacular sections during the whole trip but after only 3-4 hours of sleep, we were just too exhausted to do it. We chickened out and opted for the main road.

The road was leading through a plain, long and flat desert section for hours We hardly came across any towns, only the odd camel herder’s shacks or very small villages. Getting into Nouakchott was quite a shock – what you see when driving through to the center is not what you expect from a capital city.

Road surface is like the Moon’s surface or non-existent. You constantly need to be aware of cars suddenly turning in random directions without indicating while you are negotiating the donkey-cart next to you.

We got to the hotel that Jim’s wife kindly booked for us from back home (he calls her e-wife!) and after seeing how the city looked, decided to just have dinner in the hotel restaurant after a much-needed shower.

This is where we learned that something terrible had happened just 15 miles outside Nouakchott. One of the teams from the Spirit category (you can literally drive any old car to get to the finish line – no off-roading is required) was pushed off the road by a truck coming from the opposite direction. Gottfried Junghanns, the driver, had to go off the road and when he steered back on to it, his Opel Astra’s small wheels could not handle the maneuver.

According to the team driving behind them, he rolled a few times and suffered horrible injuries. Being Mauritania, there is no ambulance that suddenly shows up, so they had to be taken to a hospital on a truck bed.

The rally’s medical teams were quickly making their way to the hospital as well and were working hard to stabilize Gottfried until an air evacuation could be organized. It took a few days, but he was then flown to Berlin so everyone was hopeful.

Thomas Wagenbreth, his co-driver and friend, was much luckier and didn’t have life-threatening injuries.

It was devastating to hear about the accident from the team who pulled him out of the wreck. We were quite shaken; it was a reminder of how dangerous it can be to drive so far away from home where conditions are vastly different.

The bad news was followed by worse when, two weeks later, we learned that Gottfried had passed away. Although I didn’t speak to him personally, I met him a few times during the rally and he seemed like an extremely kind person. He must be missed by his family and friends very much.