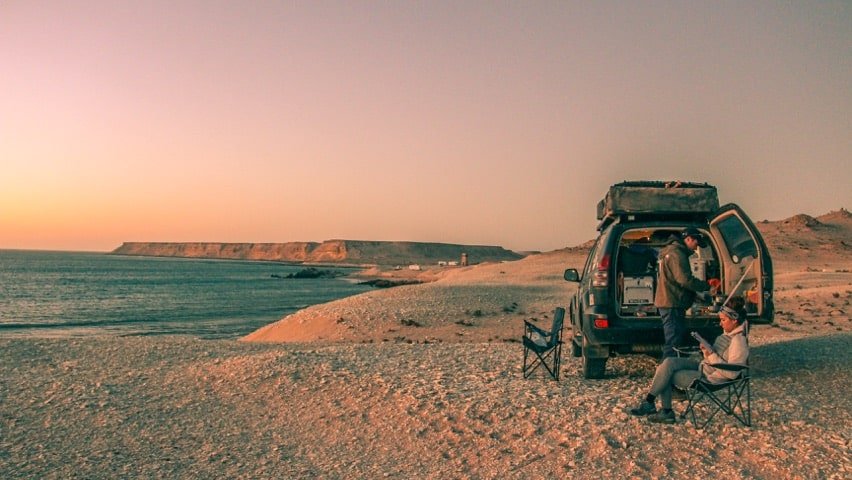 We woke up relaxed, as we didn’t have to wake up to an annoying alarm screaming from our phones for a change.

The plan was to hang around Dakhla, really just relax and catch up with our messages and emails.

The Dar Dakhla had a nice rooftop breakfast bar set up, so we enjoyed our brekkie with a view to the Atlantic.

The sun was clear and we were looking forward to a day of just walking around town, having a tea somewhere and perhaps doing some reading.

You’re never really sure in Western Sahara and Morocco whether you’ll be able to buy a beer with your dinner.

They obviously don’t drink alcohol, given 99% of Morocco’s population are Muslim. Even in touristy places, we found that it was quite random whether some alcohol was on the drinks menu or not. I mentioned before that if you’re in Dakhla, Restaurant Bahia usually serves beer.

This time though, we wanted to do as the locals did, so we opted for the local tea that is served with a tiny ritual. You pour the tea into small glasses, then open the top of the tea pot and pour the tea back.

Repeat this 3-4 times and that’s when you’re tea is finally sufficiently mixed and the flavours supposedly balanced.

That exercise I think is also repeated so that the half a ton of sugar they put in (we protested hard but sometimes it was too late) is dissolved completely.

We sat in the sunny terrace of a cafe and enjoyed the quiet afternoon, using the Morocco Lonely Planet to go through our plans for the next two weeks.

While sitting there, I was thinking we were really remote still from the world we knew.

The little square in front of us was empty, there wasn’t much traffic and even though the town got quite busy in the evening with the night market and all the restaurants open, the quiet afternoon reminded us of how much we really were off the beaten path.

We also talked about our not too future plans, as our start date to set off for Asia was approaching. We’re planning to drive to Singapore from Europe, leaving around the 18th of June!

More future plans would include a longer African expedition, really discovering the continent and doing adventures like the Mozambique Horse Safari – An African horseback adventure safari on the coast of Vilanculos, Mozambique.

The previous day when we were still driving from the border on the coast, we saw a large canyon that ended on a beach and just for a split second while I was driving, I saw some vans and an expedition truck parking there.

We decided not to go to one of the restaurants around town, but to drive down there and cook a nice meal for dinner in true overlanding style. It was an hour’s drive due to the long peninsula, but it was well worth it.

We watched the sunset while the quick can food was warming up on our gas cooker.

The vans and the exhibition truck was still around but we didn’t have the chance to talk to anyone. On our way out from this spot, a guy with his flashlight signalled for us to stop.

I was hesitant at first, but then realized he was actually the guard at this unofficial campsite. So it’s actually safe to stay there; if you ever find yourself around that area, definitely check it out, it’s beautiful!